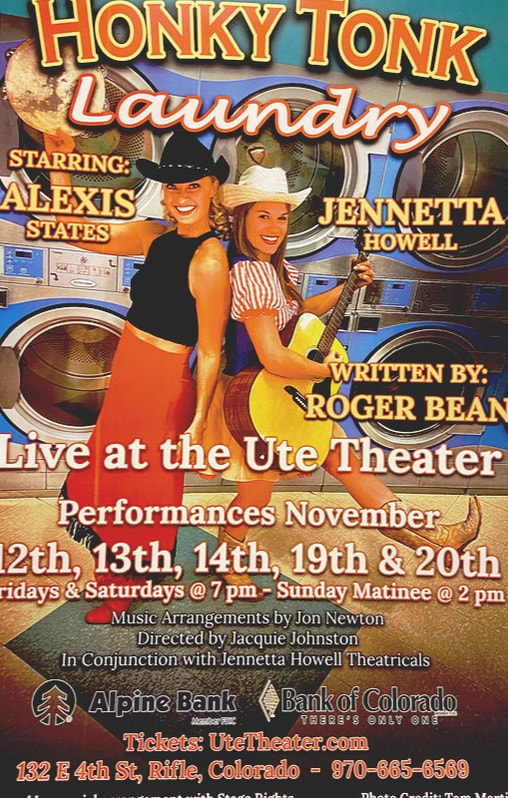 ​ We HAVE TWO VENUES for our Christmas cabaret show 2021

Kyle Jones is a Pianist, Composer, and Producer here in the Roaring Fork Valley.  He has played piano for over 26 years and, with a bachelor's degree in Music Education from the University of Northern Colorado, has been Music Director for Aspen Community Theatre, Defiance Community Theater, and Theatre Aspen, and has 5 years in public music education along with more in private music education.  Kyle is currently the Music Director at the Riviera Supper Club in Glenwood Springs and performs regularly throughout the valley.

Julie Maniscalchi has been a professional performer in the Roaring Fork Valley for over 30 years. A Crystal Palace veteran, Glenwood Vaudeville Revue, Snowmass Rep, and Theatre Aspen. Julie‘s newest adventure has been singing in “A Band Called Alexis. She is thrilled to be performing again with her beautiful friends. Blessings to my two daughters.

Jennetta Howell grew up in Glenwood Springs and has come full circle from her start with Defiance Community Players at age 9 and is currently on the board of directors. She is graduate of The American Musical and Dramatic Academy in New York City. Jennetta has traveled the globe entertaining many audiences. Her professional career has spanned from New York City, Los Angeles to Aspen and the Glenwood Vaudeville Revue. She has taught theater for 17 years, been a director and choreographer of 26 local productions and wife to James and proud mom to Kaylie and Memphis. Can be seen teaching music at Cactus Valley Elementary School. This Christmas cabaret marks our forth year and is thrilled to be sharing the stage with these talented friends. This show was written, directed and produced by her. Enjoy the show and may all your Christmas be bright!

Eileen Martin grew up collaborating, writing, and performing at local malls. Headlining children’s musicals with Theater of Performing Arts in NJ, and then toured the US with traveling bands. She has also done local theater with Defiance Players and ACT. Her education continued with Master classes in Aspen with Sir Richard Digby Day of the London Royal Academy, local CMC theater. She received film and camera classes in California with Faces International. Eileen has appeared in Faces International magazine in California and modeled for famous California Artists and Colleges. She is now living in New Castle, Colorado and can be seen on the worship team live stream at NCC. Eileen has recently appeared at Redstone Castle with the Castle Players and Riviera Club.  Eileen plays guitar and has written over fifty original songs. She is the owner of Inspired Artists Music and is in the recording process.

Alexis States- will not be joining the cast this 2021 season. She has been singing her entire life, having sang her first solo at the age of 3 in a church Christmas show. Alexis has Bachelors degree in Vocal Music, and began her professional career in theater singing show tunes and acting in numerous musicals and revues-including a run at the Glenwood Springs Vaudeville Revue. Currently, Alexis devotes her talents as the front woman and lead singer of a country rock band-- A Band Called Alexis-- that tours the Roaring Fork Valley and beyond. When not on stage, Alexis loves to spend her time and energy with her 3 year old daughter, Jaeden and her amazingly supportive husband, Daniel. Alexis is thrilled to be a part of the 1940's Christmas Cabaret and hopes you enjoy the show!